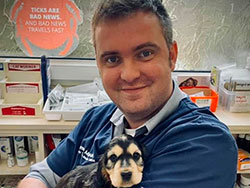 James graduated from Liverpool University in 2012 after completing a three-year BSc. in BioVeterinary Science and a five-year BVSc. in Veterinary Science. He started his career in West Wickham, Kent; focusing on small animals and after four years decided to move back to the Ewell area.

After working locally for another practice for a further four years, he joined the team here in February 2021 and enjoys being able to look after animals in the area where he was raised. James has a particular interest in small animal medicine, especially metabolic disease and dermatology cases.