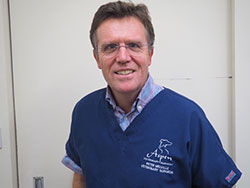 Peter is the owner and veterinary surgeon of the practice and qualified from Murdoch University in Perth, Western Australia in 1982. After working in the Kimberley region of northern W.A. for 4 years, he came to the UK in 1987 and worked in a large practice concentrating on small animals in East Molesey, Surrey. In 1991, he and his Partner John Ball acquired the Aspen Veterinary Surgery in Tolworth, then in 1996 they bought McFarlane and Associates, now Ewell Veterinary Centre from Bob McFarlane. Outside the practice, he plays tennis and golf and is a keen follower of Aussie Rules football. He is married to Penny and they have three daughters, his dog "Freo" and his cat "Felix".